The Troublemaker Next Door Release Day

Release Day! Hurray! The first of the McCauley brothers to fall, Flynn McCauley, gets his happily ever after in The Troublemaker Next Door. 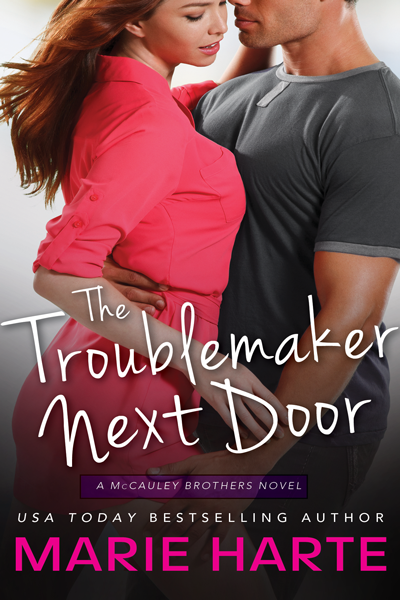 SHE'S SWORN OFF MEN
It's been the day from hell for Maddie. Instead of offering a promotion, her boss made a pass. She quit, then got dumped by her lukewarm boyfriend. As the fiery redhead has a foul-mouthed meltdown, her green-eyed neighbor Flynn McCauley stands in her kitchen...completely captivated.

UNTIL HE THROWS A WRENCH INTO HER PLANS
He was just there to fix the sink as a favor. He's not into relationships. She's done with idiots. But where there are friends...sometimes there are benefits. And sometimes the boy next door might be just what you need at the end of every day.

INTRODUCING...THE McCAULEY BROTHERS
Welcome to the rough-and-tumble McCauley family, a tight-knit band of four bachelor brothers who work hard, drink beer, and relentlessly tease each other. When three independent women move in next door, all hell breaks loose.

PRAISE FOR MARIE HARTE:
"Harte includes an amazing storyline filled with strong-willed characters and a reluctant love affair. The love scenes will make readers sweat, and Harte does an awesome job of visually painting the picture of the two lead characters." - RT Book Reviews

"This is the first in Harte's McCauley Brothers series, and it's a winner. Readers will find plenty of secondary characters to keep track of, each unique and likable, while the story is fast-paced, with countless spicy scenes that will make readers hungry for the next installment." - Booklist

"Off the charts scorching hot."-Long and Short Reviews

“Morning. Or should I say, afternoon?” When she continued to say nothing, he asked, “May I come in?”

“Sure.” She turned around, raced back up the stairs, and yelled, “Be right back.”

“O-kay.” Flynn walked inside and shut the door behind him. He’d spent the first few years of his life in this house. Something about the open airiness of it had always screamed fairies and pixies to him. Not that he’d ever tell his brothers he imagined fairies had lived in the garden, but hell, he’d been all of four. Then Cam had started walking, and they’d moved a few blocks over into a bigger spread. But he’d never forgotten his fondness for this place.

He shook his head when he saw his impression from Friday remained the same. Everything seemed so tidy.
How could people live like this? No clutter, no mess. It was like Mike’s, but without the funk of dirty socks and little kid smell.

“I had to change.” She sounded out of breath when she found him in the foyer again.

“Sorry to put you out.” He smiled, wishing she hadn’t changed a thing. But with or without a bra, Maddie looked incredible. She’d brushed her hair, and he wanted to touch it, to see if it felt as soft as it looked. Her shirt still clung to her curves, but left more to the imagination since she’d put on underclothes.

“What’s up?” She shoved her hands in her back pockets.

He forced himself to keep his gaze level with her eyes. He offered her the flowers. “These are for you. Not only for that apology yesterday, but for freaking out my nephew. I don’t think a girl has ever seen Colin in his Spidey shorts before.”

She flushed and laughed. “He hit a really high pitch as he raced from the room. I hope he’s not too embarrassed.”

“Nope. We McCauleys can handle a lot. Look at me. I’m not too scarred after you caught me in my briefs.”

The pink on her cheeks deepened. “They weren’t exactly briefs.”

Pleased she’d noticed, he continued, “And hey, I surprised you this morning. I guess we’re even.”

She clutched the flowers. “I guess we are.”

Silence settled between them, one fraught with a tension Flynn could only describe as sexual. He would have been content to stare at her all day. She had a darker complexion than he would have expected on a redhead. Not pale, her olive skin turned a delightful pink when she was embarrassed. Her face could have graced any of the magazines stacked neatly on her coffee table, yet her nose had a smattering of freckles at the bridge that stopped her short of perfection.

And her eyes… He was drowning in them, caught in the amber color that looked gold one minute, deep brown the next. He wondered what she saw when she looked at him. Did she feel the attraction? Was his interest flattering, or was he one more creep like all the rest who no doubt fell at her feet when confronted with such beauty?

“I should put these in water,” she said in a husky voice that made him want to take her in his arms and carry her upstairs.

“Yeah.” He cleared his throat and followed her into the kitchen, unable to look away from her curves. Man, that ass just begged to be held. “Ah, so the reason I stopped by. My mom and dad are having a picnic next Saturday and wanted to invite you guys. Think you all could swing by around two?” He hadn’t confirmed the date or time yet, but he knew his mother wouldn’t say no, and whatever she wanted, Dad agreed to.

“I’d say I have to check my calendar, but not anymore. I’m free for the immediate future.” She paused. “Man, that doesn’t sound good, does it?”

“Me whining about my job again. I’m done with that. I’d love to go to a barbecue. I haven’t been to one in years. That’s really nice of your parents.”

“I can’t answer for Vanessa or Abby, but if they’re not working, I know they’d love to be there.”

“Great.” Good, great. She reduced him to one-word answers. He couldn’t think about more than her mouth, watching her form each word with those plump, red lips. She’d been so soft yesterday, and that brief kiss had given him some dreams last night...

“You okay, Flynn?” She frowned. “You look a little funny.”

“Mike told me to leave you alone,” he blurted.

“Cautioned me not to screw over his neighbors, because he didn’t want to deal with a bunch of annoyed women.”

“What do you mean?” She took a step back and bumped against the counter.

He closed the distance between them and caged her between his arms. It gratified him to hear her breathing as raspy and uneven as his. “I know you hate men. That you had a crappy day on Friday. And that you have some things to iron out. I just wanted to thank you for yesterday. Nothing more than that. Okay?”

She licked her lips, and he forced himself to keep an inch or two between them. Taking her on the counter would have to wait, because her roommates would be back soon.

“Thank me for apologizing? But you don’t have to—”

“Yes, Maddie. I do.” She didn’t understand. He did have to, or he’d lose his ever-loving mind. His lips met hers, and he forgot his own name.


THE TROUBLEMAKER NEXT DOOR


Thanks for letting me share with you, and happy reading!