Thornbrook Park marks my return to historical romance, and I'm so excited to be back!

Fans of Downton Abbey will adore this brand-new Edwardian-period romance series set at the grand estate of Thornbrook Park, seat of the Earl of Averford. 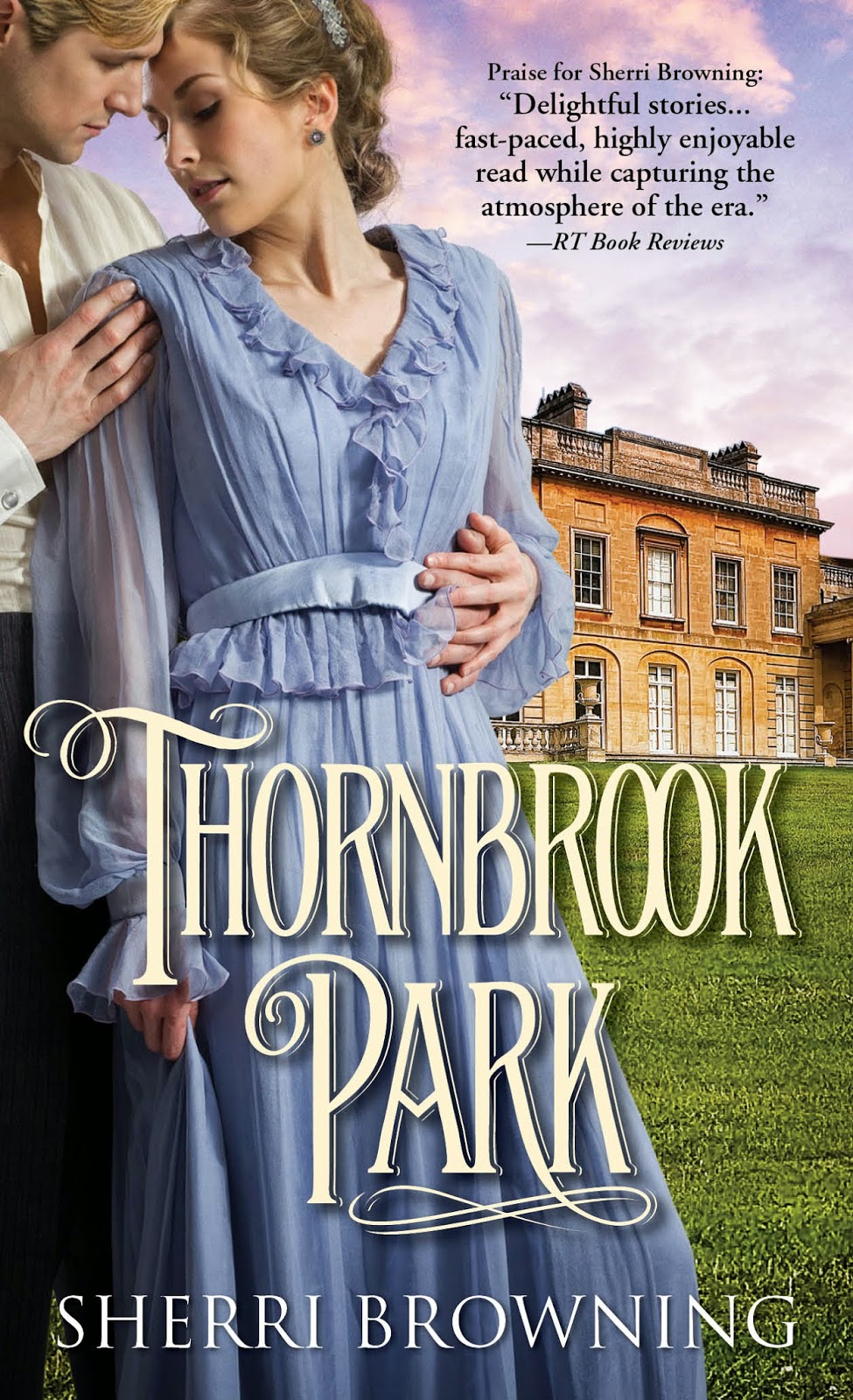 Widowed. Impoverished. Alone.
Life hasn't gone as expected for Eve Kendal, but she has time to regroup when her childhood friend, now Countess of Averford, brings Eve to her elegant Yorkshire estate.

Can She Find a Refuge at Thornbrook Park?
For Captain Marcus Thorne, a return home means facing the demons that drove him to war in the first place. He's a powder keg waiting for a stray spark... until his eyes meet Eve's and the world goes quiet.

Set against the backdrop of aristocratic tradition unraveling in a fast-changing world, Thornbrook Park delivers all the intrigue, mystery, and grand romance fans of Downton Abbey crave.

"Written beautifully... I thoroughly enjoyed the characters and the author made them all so real. " - Bookworm 2 Bookworm"Readers will enjoy their visit to Thornbrook Park." - RT Book Reviews

"Browning weaves historic details, scenes, strength and vulnerability into the story to give a solid visual image to readers, even as their hearts are being charmed."- I Am, Indeed Blog

"Charming. The leads have a sweet, natural chemistry; the secondary story line is dynamic."- Publisher's Weekly


Before he could protest, she fled up the stairs. She was halfway up when she heard footsteps behind her and Marcus calling out her name.
Before she turned, she wiped her eyes. “Yes, Captain Thorne?”
“Eve.” He gripped her gently by the elbows, urging her closer. “I thought I saw you crying. Are you well?”
“Of course. It’s silly, really. Please just let me go on up.”
He didn’t release her. “You can rely on me if there’s something troubling you. I want to help.”
“It’s nothing. Lack of sleep, perhaps. Excitement kept me up all night, and then I woke early for the train. Ben’s solicitor gave me reason to believe that my financial troubles may be at an end, though I dare not hope. And then…”
“And then?” He slipped a finger under her chin and tipped her face up to meet his gaze.
She took a breath and found that she was able to laugh off her fear. “Then, I thought someone was following me around London. I suppose I dare not allow myself even that brief glimpse of hope before my imagination rips it straightaway. Who would follow me? Ridiculous.”
His amber eyes clouded over, glinting gold in the dim light of the stairway. “And yet you don’t strike me as a hysterical female. You seem very level-headed to me. What did you see?”
“A man in a black coat and bowler hat behind me, and then passing again and again by the tearoom where I spent an hour or so. But don’t half the men in London fit such a description? I convinced myself that I kept seeing the same one. On further consideration, it had to have been different men, many different men. As I said, lack of sleep.”
“Hmm.” He pursed his lips. “Perhaps. But I mean to stay by your side tomorrow, just in case.”
“It’s not necessary. I have another meeting with the solicitor.”
“I have no pressing business. I’ll go with you.”
“All right.” As much as she craved independence, she had to admit that she felt more comfortable having a companion, and spending more time at Captain Thorne’s side definitely appealed. “Thank you.”
Curse it if her eyes weren’t welling up again.
“What now?” His voice sounded far more concerned than annoyed.
“I’m embarrassed by my weakness. I’d been so determined to handle my business all on my own, and now you think I need a bodyguard. Not that I mind having one, but I mean to stand on my own two feet, no need to be looked after like a fragile female. Exactly what I must appear to you when I resort to tears. I might not even be in such a spot if Ben had relied on me. He wanted to do everything for me, to look after me.”
He placed a finger to her lips. “You can still be independent and rely on friends now and then. Do you know how remarkable you are? You stayed strong when other women left alone in India might have crumbled. You moved out of your house and back to England. Of course, you can take care of yourself, Eve. Who would doubt it?”
Did he really see her that way?
“I wish I had been more insistent with Ben. If only I had demanded to be aware of all of our business instead of letting him think he was protecting me from big decisions.” She couldn’t hide the surprise in her voice, and she met Marcus’s gaze without thinking. “The entire time I was married, I wasn’t quite myself. What can it mean? I loved him. I did. But I wasn’t me.”
“Love makes us do foolish things.” He stroked her face and moved closer. “Foolish, foolish things.”
Her eyes met his, seeing the sudden fire of determination in them, then strayed to his lush lips that he nibbled briefly before he said the one word that would set her over the edge.
“Please.”
One word, and she was lost. All fight and sense went out of her. She wasn’t sure if he had kissed her or she had kissed him, but their mouths were together, meeting hungrily. He slipped his tongue between her lips, and she drew on it, pulling him deeper. Somewhere, a service bell rang, an angry tinkling, but she was breathless in his arms, pressed up against the banister, his hands on her backside. What if Mr. Sutton came along? Or Brandon?
She pushed him away. “I must go. I must. I’m sorry.”
Before she could be persuaded to stay, she ran up the stairs and left Marcus standing there alone.


Check out my spectacular Release Week Giveaway Package featuring the Downton Abbey Board Game, Yorkshire Teatime Recipe Book, Tote Bag, and more. Comment this week at my website, sherribrowningerwin.com, or on my Facebook, and be entered to win (winner drawn at random from comments). 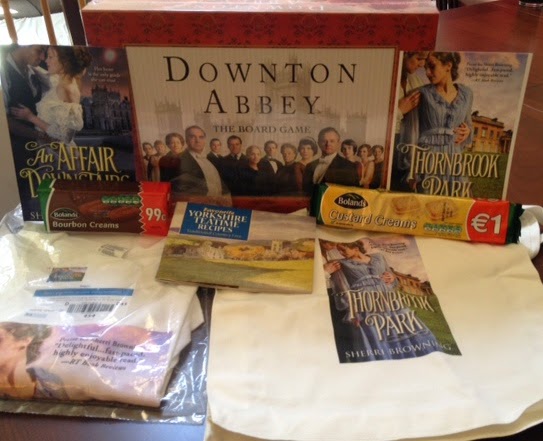 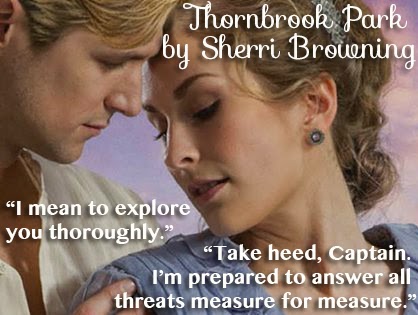