BENEATH THE THIRTEEN MOONS is released! 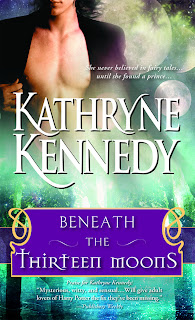 Welcome to my launch party! Although BENEATH THE THIRTEEN MOONS is a re-release of the original hardcover in mass-market paperback, it never got a launch party before, so this is quite a treat! So pop open some cyber-champagne, give a little toast, and I’ll share some trivia about the book with you.

The original publication date of the small press hardcover edition was December 1, 2003, exactly 7 years to the day of the current paperback release.

It was my very first book-length manuscript.

The world I created was inspired by my love of the jungle, the ocean, and Venice.

The original cover was a swamp (if you’re curious, you can see it on my website). The new cover more accurately reflects the contents, and I really, really love it!

It was to be the first book in a series where humans have colonized and adapted themselves to different planetary environments, and where the love of one man and a woman would change the course of the planet’s history (kinda like Antony & Cleopatra).

When I originally sent it to publishers, there was no such thing as fantasy romance, so no one knew how to market it—too much of an equal mix of fantasy & romance…and a little science fiction. I eventually sold it, but changed direction because of the market, and never finished the second book about a planet where humans are forced to live in enormous caves because of the harsh environment (although I’ve got the first six chapters or so laying about somewhere).

I swear whoever created the movie AVATAR was inspired by BENEATH THE THIRTEEN MOONS. Some of the details of the worlds are so similar! It was almost like seeing my book come to life (err, although the plot is drastically different).

My sister told me that the song TREES by Marty Casey & The Lovehammers reminds her of BENEATH THE THIRTEEN MOONS:

This is the only one of my books my youngest son has read…because I read it aloud to him, and when I got to the sensual scenes, I would just say “And then they kissed.” I’d flip another page “And then they kissed some more.” And sometimes through a few pages “Uh, they kept kissing.” And he would say “Geez, Mom”. And then I would pick up the main plot of the story and start reading again.

I had a lot of ‘gazing into one another’s eyes’ that my original editor had to point out to me to cut. :}

In my first draft, my hero & heroine did not make love until after they were married. It frustrated my editor, and I added the now infamous Giant Flower Love Scene. Oh, and if you’ve read any of my later books, yeah, sex before marriage is not an issue with me anymore, as long as I know they are each other’s one and only true love.

When Sourcebooks decided to re-release it, I was sorely tempted to rewrite the entire book. But then, it wouldn’t have been me, where I was at as a writer at the time, and would have turned into a different story. So other than a few minor things, I left it as is.

Many of the character’s names in the book are alterations of the sea world. My hero is Korl (coral), my heroine Mahri (mahimahi), Korl’s father is King Oshen (ocean)…I’ll let you uncover the other names I’ve altered when you read the book. I had a bit of fun with it.

I hope you found some of the history of the book interesting, and I do hope you enjoy reading BENEATH THE THIRTEEN MOONS. To celebrate the launch, Sourcebooks is giving away a free copy to one lucky commenter (USA & Canada only). So be sure to say hi, and check the comments tomorrow to see if you won! If you didn’t get lucky this time, I’ve listed my blog tour below. Stop by at the place and date shown, leave a comment, and you’ll have even more chances to win.

BLOG TOUR schedule for BENEATH THE THIRTEEN MOONS

12/8 Opposites Attract in BENEATH THE THIRTEEN MOONS
Fresh Fiction http://freshfiction.com/pages.php?id=blog

12/10 Interview!
Much Cheaper Than Therapy http://www.muchcheaperthantherapy.blogspot.com/

12/14 The World of BENEATH THE THIRTEEN MOONS
Where I answer the question of how I come up with such imaginative worlds.
Bookalicious http://bookalicio.us/

12/27 The Inspiration for BENEATH THE THIRTEEN MOONS
Where I answer the questions: What was your inspiration for this novel? Are you excited to see it in print again?
A Moment with Mystee http://amomentwithmystee.blogspot.com/


BENEATH THE THIRTEEN MOONS BY KATHRYNE KENNEDY—IN STORES DECEMBER 2010

He's a ruler in a divided world...
In a magical watery world of the Sea Forest, the divide between the rulers and the people is an uncrossable chasm. Handsome, arrogant prince Korl Com'nder has lived a life of luxury that is nothing more than a fantasy to the people he rules. Until the day he is accidentally kidnapped by a beautiful outlaw smuggler and is forced to open his eyes to the world outside his palace walls.

She's an outcast, but at least she has her independence...
Mahri Zin would stop at nothing to save her village, and when they needed a healer she didn't think twice about kidnapping one. But when she realizes that the healer she so impulsively stole is none other than the crown prince of Sea Forest, Mahri knows that she has a chance to change the fate of her people...

Kathryne Kennedy is a multipublished, award-winning author of magical romances. She’s lived in Guam, Okinawa, and several states in the U.S., and currently lives in Arizona with her wonderful family—which includes two very tiny Chihuahuas. She welcomes readers to visit her website where she has ongoing contests at: http://www.kathrynekennedy.com/.