By Cheryl Brooks November 04, 2009
A friend of mine sent me this in an email yesterday, and I thought it was quite funny in light of the line of work I'm in.

If you can't find the book you're looking for.... 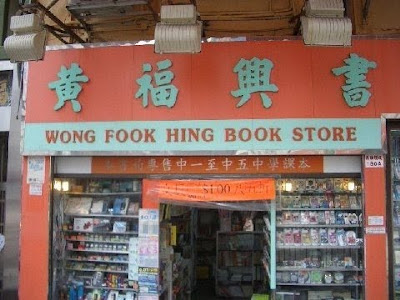 I wonder if Wong carries copies of the Cat Star Chronicles? Something tells me he wouldn't, so if you're looking for Slave or Outcast, this sentiment probably holds true.

Blogging and I have become good friends over the past year or so. I write a blog nearly every day and some days I write several. So when do I write the books, you may ask? My reply is that I have no FOOK HING idea! Well, actually, I do, for though I occasionally stagger forth from my desk to make dinner or go save some lives, the truth is, like most writers, I pretty much sit at a desk in front of a computer and write.

That's it. We write. Nothing glamorous about it and not something you should take up if you feel the need to get more exercise. The back of my legs hurt all the time now. It's been suggested that this is due to:

1. Bilateral deep vein thrombosis. This suggestion is courtesy of one of my nurse friends. I figure if that was the case, I'd have thrown a pulmonary embolus by now, so I don't think that's it (but I'm taking two 81 mg enteric coated aspirins a day just in case).
2. That I need new shoes. This one got two votes. One from my chiropractor and one from another nurse friend who has actually had blood clots in her legs (and thrown an embolus). I got new shoes last week, but so far, I can't tell much difference.
3. That my poor legs are carrying too much weight. This one is from my doctor who would love for me to get my weight and blood sugar down, but then I wouldn't need him, would I?
4. That I sit too much, which is my take on the situation. However, with the revisions to Hero due in exactly seven days (EEEKKK!!!!) and blogs to write, I have no choice but to sit.

Robin Kaye had an idea for a treadmill + desk thing, but I haven't gotten that far. In fact, I don't believe the treadmill exists that can fit in my house, let alone my bedroom--which is where I would need it to be. Looks like the only way to get a treadmill is to add on another room--or seriously get rid of some stuff around here. I've lived in this house for twenty years now and the clutter has won the fight. Oh, I throw out a few things from time to time, but the task is so daunting that it defeats me before I begin.

My DH and I have this dream that one day a truck will come lumbering up our driveway pulling a dumpster behind it and leave it here for a month for us to fill to the brim, and then that same truck will return and haul it all away. I feel the need to recycle and reuse most things, so the thought of putting a couch in a dumpster gives me cold chills, but it really needs to be done. The only other alternative is to move, and since this house is paid for, I don't see that happening.

I think I got off on a tangent there. I was talking about writing and the lack of glamor, which brings me to the Romantic Times convention next spring. A fellow writer wants someone to go with her and share a hotel room and I'm trying to decide whether or not I should go. It's five full days of workshops, costume balls, and dancing cavemen. Not sure I want to dress up in costume, but having a few cover models around might be fun. There was a sad scarcity of men at the RWA nationals, so this would be an improvement, however, that was only three full days and it nearly killed me. Not sure I can do five. And the dressing up was a bit of a challenge in DC. I'd probably end up wearing the same clothes I bought for that event because with the exception of a couple of shirts, I haven't worn any of them since.

So, what about it? I know Judi has been, but has anyone else? Does it add a touch of glamor to our isolated writer's lives? Are the costume parties worth the effort? Does the idea of standing next to a trim, fit cover model turn you on or make those of us with Writer's Butt want to run and hide? What are your thoughts?